The United Nations is urging countries across the globe to phase-out old style incandescent light bulbs and switch to low-energy compact fluorescent light (CFL) bulbs to save billions of dollars in energy costs as well as help combat climate change.

One issue with such bulbs is that they contain minute traces of mercury, however, and hence should be recycled to prevent the release of mercury into the environment rather than just tossed into a dumpster.

This, of course, has created an enormous opportunity to automate the collection of old CFL bulbs -- an opportunity that one machine maker in the UK has clearly identified.

That's right. Partly thanks to the stealthy deployment of a machine vision system, London, UK-based Revend Recycling has now developed a machine to collect light bulbs in exchange for discount vouchers or other consumer rewards. 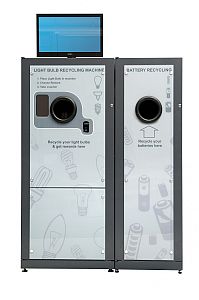 When using the so-called "Light Bulb Recycling Reverse Vending" machine, an individual is guided through the recycling process by a touch-screen menu. After the unwanted bulbs are placed into the machine, they are then identified by the vision system, after which the machine softly drops the bulbs into a storage container.

The machine then automatically dispenses a reward incentive voucher, which can be chosen from a large selection of different rewards on the touch-screen.

To enable recovery and recycling statistics to be collated, the recycling data captured from every light bulb received are transmitted to a secure central database. An embedded computer system in the machine also determines when the light bulb storage container in the machine is full, and when it is, the machine automatically sends a text or email when it nears full capacity, so that it can be emptied.

So far, the vision based recycling machine has proved to be a bit of a hit. The Scandinavian modern-style furniture and accessories store Ikea, for example, recently inked an agreement with Revend Recycling, and soon the store's customers in the UK, Germany, and Denmark will have the option to recycle used light bulbs with the machines. As an added feature, the recycling machines can also be purchased with an add-on system for collecting domestic batteries.
Posted by Andy Wilson at 7:25 AM