I don’t know whether Automate 2011 (held at McCormick Place in Chicago, March 21-24) was a success for every exhibitor and attendee, but it had all the necessary elements. Unofficial numbers for the show were 170 exhibitors and over 7500 attendees.

The floor traffic, which waxed and waned during the four days of the show, seemed to consist of many system integrators, tool manufacturers, and warehouse system providers—ideal traffic for the show and attributable to the very large, co-located ProMat show on materials handling. Indeed, walking around ProMat was a bit like walking through a display of machine vision in action.

Having recently completed a market report on the use of vision in service robots in, among other applications, warehousing, it was great to see the robots at Kiva Systems gliding eerily around the floor, using embedded smart camera technology to read Data Matrix codes on the floor and to position themselves below shelves that they then picked up and moved to a human who would pick out desired parts.

In additional good news for the machine vision industry, the International Federation of Robotics (IFR) presented the preliminary results of its annual statistics for industrial robots, including vision-guided robots. In 2010, with more than 115,000 industrial robots shipped, the number of units sold worldwide almost doubled from 2009, the lowest year since the early 1990s.

Here are some slides from the IFR presentation, which show trends from 2001 to 2011, and the strength of markets in Asia, especially in Korea. An article on the subject explores the trends in different regions and industries (click on images to enlarge). 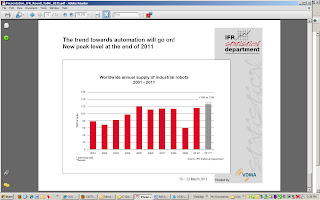 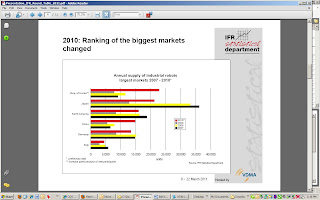 Posted by Conard Holton at 2:46 PM No comments:

News about the supply chain of vision and electronic components coming from Japan has so far been tentative and sporadic. The ongoing effects of the earthquake, tsunami, and nuclear power plant failures have dominated the news but indications of specific global economic consequences are emerging.

A New York Times article today investigates some of the impacts, noting that a Texas Instruments plant north of Tokyo that make A/D chips and accounts for 10% of TI's global output was damaged and won't resume full production until September. Toshiba has closed some of its production lines, potentially affecting the availability of NAND flash chips.

The port of Sendai-Shiogama is heavily damaged. It is the 13th largest Japanese port in container shipments and of particular importance to Sony, Canon, and Pioneer. FedEx shut service to much of eastern Japan, including Tokyo, following the earthquake but now reports resumption with some service delays.

Please let me know if you have any related information - cholton@pennwell.com.
Posted by Conard Holton at 6:40 AM No comments: