Imaging is all in the mind

In the 1983 science-fiction movie classic Brainstorm, a team of scientists invents a helmet that allows sensations and emotions to be recorded from a person's brain and converted to tape so that others can experience them.

While this seemed quite unbelievable thirty years ago, it now appears that scientists at the University of California-Berkeley are bringing these futuristic ideas a little closer to reality!

As farfetched as it might sound, the university team in professor Jack Gallant's laboratory has developed a system that uses functional magnetic resonance imaging (fMRI) and computational algorithms to "decode" and then "reconstruct" visual experiences such as watching movies.

UC-Berkeley's Dr. Shinji Nishimoto and two other research team members served as guinea pigs to test out the system, which required them to remain still inside an MRI scanner for hours at a time.

While they were in the scanner, they watched two separate sets of movie trailers, while the fMRI system measured the blood flow in their occipitotemporal visual cortexes. On a computer, the images of the blood flow taken by the scanner were then divided into sections, after which they were fed into a computer that learned which visual patterns in the movie corresponded with particular brain activity.

Brain activity evoked by a second set of clips was then used to test a movie reconstruction algorithm developed by the researchers. This was done by feeding random YouTube videos into the computer program. The 100 clips that the program decided were closest to the clips that the subject had probably seen based on the brain activity were then merged to produce a continuous reconstruction of the original clips.

The researchers' ideas might one day lead to the development of a system that could produce moving images that represent dreams and memories, too. If they do achieve that goal, however, I can only hope that the images are just as blurry as the ones that they have produced already. Anything sharper might be a little embarrassing!
Posted by Andy Wilson at 11:45 AM No comments:

All technology can be used for both good and evil purposes. Take infrared cameras, for example. While they can be used to provide a good indication of where your house might need a little more insulation, they can also be used by crooks to capture the details of the PIN you use each time you slip your card into an ATM to withdraw cash.

That, at least, is the opinion of a band of researchers from the University of California at San Diego (San Diego, CA, USA) who have apparently now demonstrated that the secret codes typed in by banking customers on ATMs can be recorded by a digital infrared camera due to the residual heat left behind on their keypads.

According to an article on MIT’s Technology Review web site, the California academics showed that a digital infrared camera can read the digits of a customer's PIN number on the keypad more than 80% of the time if used immediately; if the camera is used a minute later, it can still detect the correct digits about half the time.

But even Mowery had to admit that the likelihood of anyone attacking an ATM in such a manner was low, partly due to the $18,000 cost of buying such a camera or its $2000 per month rental fee. He even acknowledged that mugging would prove a lot more reliable means to extract money from the ATM user, albeit the technique isn't quite as elegant as using an imaging system to do so.
Posted by Andy Wilson at 2:17 PM No comments:

While the exploitation of vision systems has made inspection tasks more automated, those systems have also reduced or eliminated the need for unskilled workers.

But such workers won't be the only ones to suffer from the onslaught of vision technology -- pretty soon even skilled folks in professions such as medicine might start to see their roles diminished by automation systems, too. 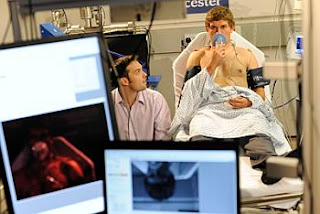 As a precursor of things to come, take a look at a new system developed by researchers at the Leicester University as a means of helping doctors to noninvasively diagnose disease.

Surrounding a conventional hospital bed, thermal, multispectral, hyperspectral, and ultrasound imagers gather information from patients. Complementing the imaging lineup is a real-time mass spectrometer that can analyze gases present in a patient's breath to detect for signs of disease.

Professor Mark Sims, the University of Leicester researcher who led the development of the system, said that its aim was to replace a doctor's eyes with imaging systems, and his nose with breath analysis systems.

Even though nearly all the technologies employed in the system have been used in one way or another, Sims said that they have never all been used in an integrated manner.

Clearly, though, if this instrumentation were coupled to advanced software that could correlate all the information captured from a patient with a database of known disease traits, one would have a pretty powerful tool through which to diagnose disease.

The doctors, of course, would then have to find something else to occupy their time. But just think of the cost savings that could be made.
Posted by Andy Wilson at 1:31 PM No comments:

Starting this month, the Vision Insider blog will offer you the reader an opinionated twice a week update about industry trends, market reports, new products and technologies. While many of these will be staff-written, we will be using this forum to allow you our readers to opine on subjects such as machine vision and image processing standards, software, hardware, and tradeshows you find useful.

If you have any strong opinions that you feel we could publish (without of course being taken to court), I would be only too pleased to hear from you. And, of course, if you disagree with what I have said, you are only too free to leave a comment using our easy to use feedback form.
Posted by Andy Wilson at 6:45 AM No comments: