Riding the Bosphorus Express—Istanbul to Munich

For the 150 people attending the European Machine Vision Association Business Conference in Istanbul last week, the meeting began as a fascinating visit to a beautiful city with a rich history, but not one usually on the machine-vision meeting circuit.

As the presentations, market reports, networking, and boat cruise passed, the specter of “The Cloud” from the Icelandic volcano began to dominate everyone’s thinking. European airspace was shutting down as we took a scenic cruise up the Bosphorus past historic Dolmabahçe Palace: 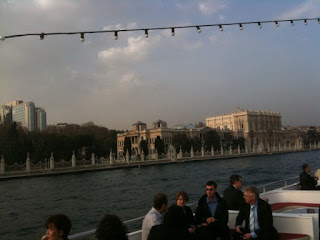 By the last day of the conference--Saturday, April 17--it was clear that all plans to fly home were in jeopardy. I was able to fly out on Sunday because the flight was direct to New York’s JFK and we could skirt the southern edge of Europe.

However, my colleague and Vision Systems Design sales rep, Johann Bylek, had a different adventure on his way home to Munich.

Here is his report:

An unexpected adventure trip from Istanbul to Munich

After the EMVA conference in Istanbul most of the European attendees were not able to fly home because of the Icelandic volcanic ash cloud. Most European airports were closed and all flights cancelled. As a result, most people were stuck in Istanbul.

It was nearby impossible to connect with any airline since all telephone lines were overloaded. Rental cars and trains were sold out across Europe, and thousands of passengers were hanging around the airports.

A group of attendees--with special thanks to the “chief coordinator” Dr. Horst G. Heinol-Heikkinen (CEO, Asentics)—began discussing other possibilities to get home.

After many false leads, it was possible to find and hire a Bulgarian bus to drive to Istanbul and pick up a group of 34 people. These passengers would then be driven over 2000 km (about 1250 miles) to Munich. And the cost for the bus and two drivers? About €290 ($385) per passenger. 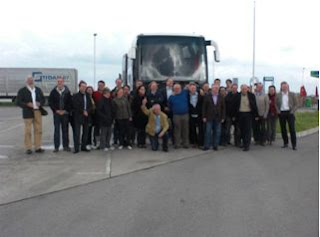 Starting at 7:00 pm Sunday evening in Istanbul, we reached the Bulgarian border at 10:00 pm. We had to use a side road to avoid the highway customs station where about 200 buses were waiting for immigration.

Pushing on to the Serbian border we had to wait in line for three hours because of six other buses ahead of us--everybody has got a Serbian stamp in their passport. One of our group, Manfred Schaffrath, from Profactor, was picked out for detailed luggage inspection, maybe searching for cigarettes or drugs. We wondered if perhaps he was suspected because he is Austrian! 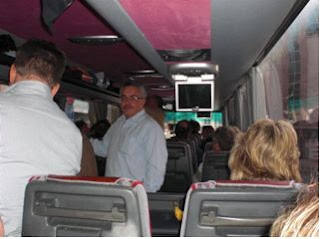 Driving the whole night and half another day the bus passed Belgrade at 3:00 pm on Monday, and then going further on through Hungary and Austria to Munich. 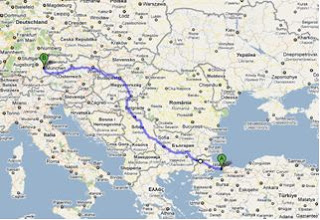 After a 37 hour bus ride through five different countries with different languages and currencies, the group arrived in Munich on Tuesday morning at 8:00 am. Everybody was tired but happy to be back in Germany.

Predicting the market outlook for machine vision products can seem akin to interpreting the patterns of tea leaves or Tarot cards or even practicing myomancy – studying the movements of mice to foretell the future. However, those attending and exhibiting at this spring’s spate of machine vision and image processing trade shows may practice a modern version of myomancy to give themselves a sense of market momentum.

This week, for example, the SPIE Defense, Security, and Sensing show held in Orlando, FL, will provide attendees an impression of the state of the markets for imaging components and applications, especially those used in infrared applications. A strong technical conference accompanies the show.

The month after, in Boston, The Vision Show, May 25-27, will give both exhibitors and attendees alike an idea of the health of machine vision industry in North America, particularly the health of component makers.

Automatica, held in Munich, Germany, June 8-11, will reveal similar prospects for components and systems in Europe, especially as the show includes a strong robotic exhibition and the collocated technical symposium, ISR/Robotik. The show also takes place at the same time and exhibition center as Intersolar 2010, which will attract a vast audience for those involved in solar energy products and services, and is a fast growing area for machine-vision components and systems.

Myomancy, anyone?
Posted by Conard Holton at 9:28 AM No comments:

A fool for milk

When I first read about automated cow milking machines that use machine vision, I thought it was amusing. Last year, LMI Technologies was working with GEA Farm Technologies to adapt its 3-D time-of-flight imager to the task of producing happier cows and higher yields.

Now I find that robot maker Fanuc Robotics has taken the concept of automated milking to an advanced stage with a herd-milking system that can be seen in this video. Machine vision just keeps getting more interesting.