From May 12-14, more than 140 attendees at the 2011 EMVA business conference in Amsterdam celebrated the soaring market for machine vision products and recounted tales of traveling home from the 2010 meeting in Istanbul through the Eyjafjallajoekull volcano "Cloud". They didn't realize they would just miss yet another cloud from an Icelandic volcano, Grímsvötn, which erupted just seven days after the conference ended and disrupted air travel across parts of northern Europe. 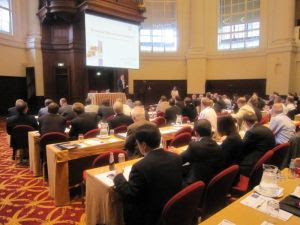 Market health of European machine vision companies and companies doing business in Europe was reported to be excellent, with many focused on application areas that exhibit particular strength, especially automotive manufacturing, transportation imaging, and surveillance. From 2009 to 2010, overall growth by European companies was almost 35% (the drop from 2008 to 2009 had been -21% overall).

Describing the market trends, Gabriele Jansen, president of Jansen C.E.O. and Member of the EMVA Executive Board, attributed the strong rebound in machine vision sales to several factors:
- Increase in industrial production
- Broad-based improvement in sentiment among industry managers due to a significant increases in overall orders and in production trends
- Decline in the inventory of finished goods to historically low levels
- Remaining effects of stimulus programs for specific industries (eg, automotive)
- Strong increase in demand for machine vision in Asia

The conference mood was excited but a bit nervous, causing many to ask: How can this growth be sustained?

To inspire attendees to ponder answers to that question, the conference included several speakers who focused on the future, with talks about globalization and sustainablity, finding new markets using the Blue Ocean strategy, and how to think about and manage for the future.

Ramesh Rashkar, an MIT professor, described his lab's work in lightfield imaging and computional light transport, including recent work on a camera that can look around a corner. Speakers also address the rapid advances being made in service robots and machine vision for agriculture.

The networking, as always at EMVA events, was excellent. Talking with so many colleagues in the machine vision "industry" also reminded me that machine vision is not an industry per se. At its core, it is the integration of technologies and products that provide services or applications that benefit true industries such as automotive or consumer goods manufacturing, security, transportation, and agriculture.

Finally, a parting view of the Cloud that was missed: This Envisat image from ESA, acquired on 24 May 2011, shows a large cloud of ash northeast of Scotland that has been carried by winds from Iceland’s Grímsvötn volcano about 1000 km away. The Grímsvötn volcano, located in southeast Iceland about 200 km east of Reykjavik, began erupting on 21 May for the first time since 2004.
Posted by Conard Holton at 9:39 AM No comments:

It's not exactly machine vision yet, but a researcher at Georgia Tech, Grant Schindler, has created what appears to be the first 3-D scanner app for an iPhone 4.

Using both the screen and the front-facing camera, the app--called Trimensional--detects patterns of light reflected off a face to build a true 3-D model.

Schindler says Trimensional can now share movies and animated GIFs of your 3-D scans and users can unlock the 3-D Model Export feature to create physical copies of any scanned object on a 3-D printer, or import textured 3-D scans into popular 3-D graphics software.

I wonder if and when such iPhone apps can be used in machine vision applications?

Posted by Conard Holton at 2:47 PM No comments:

Readers of Vision Systems Design may know that OptoFidelity (Tampere, Finland) makes systems that test user experience with products such as PDAs and mobile phones. In fact, our October 2009 cover story featured one of the company’s automated test systems, the WatchDog, which performed just such a test using a JAI Camera Link camera and National Instruments frame grabber. The WatchDog system’s interface allows a user to correlate an exact measured response of both the refresh rate of the screen and any user interaction with the device.

Now, OptoFidelity has expanded its world and made a commercial-quality video called “Man vs Robot” about a vision-guided robotic system it has built that can beat humans playing Angry Birds — which, in the unlikely case you haven’t heard, is a computer game from Rovio Mobile (Espoo, Finland) being played by millions of people on various mobile displays.

Some of the fun, machine vision, and robot technology behind that video appears in this “Making of Man vs Robot” video, also from OptoFidelity.

Posted by Conard Holton at 7:35 AM No comments: