Embedded vision is just a game

In the late 1970s, game maker Atari launched what was to become one of the most popular video games of the era -- Asteroids.

Those of our readers old enough to remember might recall how thrilling it was back then to navigate a spaceship through an asteroid field which was periodically traversed by flying saucers, shooting and destroying both while being careful not to collide with either.

Today, of course, with the advent of new home consoles such as the Sony Playstation, Microsoft Xbox, and Nintendo Wii -- and the availability of a plethora of more graphically pleasing and complex games -- one might be forgiven for thinking that games like Asteroids are ancient history.

Well, apparently not. Because thanks in part to some rather innovative Swedish image-processing technology, it looks as if old games might be about to make a comeback. 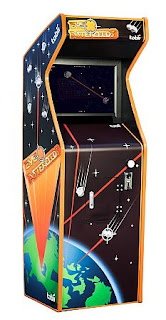 In the company’s EyeAsteroid game, players have the chance to save the world (yet again) from an impending asteroid collision. As a slew of asteroids move closer to Earth, the gamer looks at them in order to fire a laser that destroys the rocks and saves the world from destruction.

Henrik Eskilsson, the chief executive officer of Tobii Technology, believes the addition of eye control to computer games is the most significant development in the gaming industry since the introduction of motion control systems such as the Nintendo Wii. And if he’s right, that’s a big market opportunity for all sorts of folks that are associated with the vision systems business.

But perhaps more importantly, the game might make interested parties take a look at another of the company’s product offerings: an image recognition system that can find and track the eyes of drivers in order to inform an automotive safety system of the driver’s state, regardless of changes in environmental conditions.

Because while saving Earth from asteroids using the eyes might be good fun and games, saving lives on the highway through tracking the eyes of motorists is a much more distinguished achievement, and one that -- in the long run -- might also prove to be a more lucrative business opportunity.

Nevertheless, those folks more captivated by the former application of the technology will be only too pleased to know that the EyeAsteroids game is available for purchase by companies and individuals. Tobii Technology plans a limited production run of 50 units that will be available for $15,000 each.
Posted by Andy Wilson at 11:36 AM