It's a bug's life (revisited)

Remotely operated unmanned aerial vehicles (UAVs) equipped with wireless video and still cameras can be used in a variety of applications, from assisting the military and law enforcement agencies in surveillance duties, to inspecting large remote structures such as pipelines and electric transmission lines.

Typically, however, such vehicles are quite sizable, bulky beasts due to the fact that they must carry a power source as well as large cameras. And that can limit the sorts of applications that they can effectively handle.

Now however, it would appear that researchers at the University of Michigan College of Engineering have come up with an interesting idea that might one day see vehicles as small as insects carrying out such duties in confined spaces.

And that’s because the vehicles that they are proposing to "build" are, in fact, real insects that could be fitted out with the necessary technology to turn them into mobile reconnaissance devices. 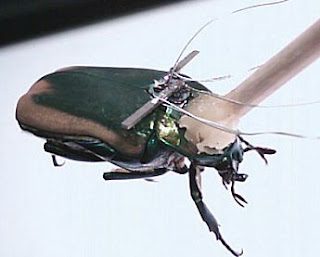 The work is at an early stage of development at the moment of course. To date, professor Khalil Najafi, the chair of electrical and computer engineering, and doctoral student Erkan Aktakka are figuring out ways to "harvest" energy from either the body heat or movement of the insects as a means to power the cameras, microphones, and other sensors and communications equipment that they might carry.

As interesting as it all sounds, there are obviously bigger engineering challenges ahead than just conquering the energy harvesting issue. One obvious problem is how the researchers will eventually control the insects once they have been fitted out with their energy harvesting devices and appropriate vision systems.

Then again, they may not need to. If a plague of such insects were dropped in Biblical proportions upon a rogue state for clandestine monitoring purposes by our armed forces, the chances that one of them would reveal some useful information would be pretty high.

The religious and political consequences of letting loose high-tech pestilent biotechnology on such countries, however, might be so profound that the little fliers never get off the ground.

Editor's note: The research work at the university was funded by the Hybrid Insect Micro Electromechanical Systems program of the Defense Advanced Research Projects Agency under grant No. N66001-07-1-2006.
Posted by Andy Wilson at 1:43 PM