While industrial vision systems might seem pretty sophisticated beasts, none has really come close to matching the astonishing characteristics of the human eye.

Despite that fact, even the human eye is often less than perfect, as those suffering from short or long-sightedness will testify. Those folks inevitably end up seeking to correct such problems either by wearing spectacles or contact lenses.

Not content with developing a contact lens to correct vision anomalies, however, a team of engineers at the University of Washington and Aalto University, Finland, have now developed a prototype contact lens that takes the concept of streaming real-time information into the eye a step closer to reality.

The contact lens itself has a built-in antenna to harvest power sent out by an external source, as well as an IC to store the energy and transfer it to a single blue LED that shines light into the eye.

One major problem the researchers had to overcome was the fact that the human eye -- with its minimum focal distance of several centimeters -- cannot resolve objects on a contact lens. Any information projected on to the lens would probably appear blurry. To resolve the issue, they incorporated a set of Fresnel lenses into the device to focus light from the LED onto the retina.

After demonstrating the operation and safety of the contact on a rabbit, they found that significant improvements are now necessary before fully functional, remotely powered displays actually become a reality. While the device, for example, could be wirelessly powered in free space from approximately 1 m away, this was reduced to about 2 cm when placed on the rabbit's eye.

Another issue facing the researchers is to create a future version of the contact lens with a display that can produce more than one color at a higher resolution. While the existing prototype lens only has one single controllable pixel, they believe that in the future such devices might incorporate hundreds of pixels that would allow users to read e-mails or text messages.

I don’t know about you, but I can’t wait for the time in which I might be able to have such e-mails, text messages, or, heaven forbid, Twitter feeds, projected directly into my eye, especially when I am on vacation. No, I wouldn’t even put my pet rabbit through such an ordeal. 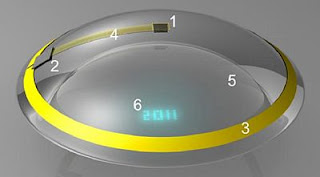